Bring it on world 2

I mentioned feeling invincible, it happened.

I went on living, kept breathing. I didn’t crack up and quit. With that came a sense of wonder, a sense of boundlessness.

It wasn’t like having super-powers but I did have an unusual sense of safe. 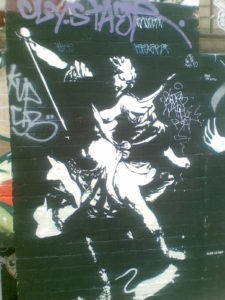 I was working in Tampa, Florida as hurricane Charley approached. There were warnings and mounting concern, the almost 400,00 people in the area were advised to evacuate. I decided to stay. I envisioned standing by the quay, leaning towards the sky, lashed by wind and rain. Defiant.

First the office closed and everyone was required to go home. I thought I could ride out the storm in my hotel. The hotel closed, I had to check out. By the time I arrived at the airport there were actions afoot to close that too. So much for pitting my self against the elements.

I made arrangements and brought my flight across the country to Portland forward a few days. The airport was crowded and filled with nervous energy. I was bemused, feeling cosseted from the building threat. It was odd to feel so removed.

I think that facing down the wind would have been and expression of the anger I hadn’t felt thus far. Good old stage 2 of grieving full of anger and resentment could have manifested, except that I had to leave town.