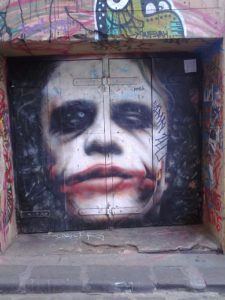 Earlier this year I entered a writing competition. The brief was to write an inspiring story about Walking the Tightrope – Caring for Someone with Depression or Bipolar Disorder.

I didn’t write the expected tale of a selfless carer. My entry was not a traditionally inspiring account of the task of a carer, as it has an unhappy outcome, and I believe it is an important not often told story. I didn’t want to gloss over how difficult the carer role is. Part of the competition requirement was to provide tips for carers which will form the basis of a new resource that will be produced. I wanted to say that no matter how much you care, no matter how many tips and resources you have, the person you’re caring for might die. I wanted to say that carers need caring for.

I Could Not Care Less

Mister died by suicide 15th March 2004. His name wasn’t really Mister. Nobody called him Mister except the owner of our local Milk Bar. “Hello Mister,” he would say. Something about the greeting amused Mister, even though that wasn’t his name.

I remember that Monday in 2004 and notice a pain somewhere. Inside. A growing pang that wasn’t present when I sat down to write but it is rising now and intensifies as I recall the days of caring for Mister while he was gripped by a deep dark depression.

This story is difficult to tell. There are things that have failed to heal.

My memory of that day in March is clear. I can recall each minute in wide-screen detail. Mister wasn’t working that day and I decided to stay home from the office. I was concerned about him. This day, his last, was demanding, as were many of the days that lead it. He said he couldn’t feel anything. He thought there was something wrong with him. And I could not fathom the depths his despair. Last year I found an article that summed up Mister’s experience, or at least. what I understood his experience to be: Dr Linehan said of her own depression, “I felt totally empty, like the Tin man; I had no way to communicate what was going on, no way to understand it.”

On that morning, Mister and I talked about the Tin man. There was something about his depression that, like the Tin man, had no heart, no feeling. Mister was convinced he couldn’t connect with anyone, that he couldn’t feel anything. Not knowing how to reassure him, and feeling rattled about how to be helpful, I cast myself as the Scarecrow, with no brains, no ideas. I talked about Wally, our timid terrier, as the Lion without courage. I painted a picture of us travelling together, saying that we were in this together. Wally and I would accompany him, even if the brick road ahead was colourless. I didn’t appreciate how helpless the Tin-Man-Mister was, nor the depth of his hopelessness. I was consumed by my own helplessness, I didn’t know what to do, how to care for him. I cared as best I could. I could not have cared any more. Nor could I have cared any less. His despair brought him to a crisis, hopeless and isolated. I was right there amid the grey and the drizzle, trying to warm him and keep myself dry.

He left the house late morning for an appointment with his psychologist. I stood the front step trying to look cheery but feeling depleted and weary. I held Wally in my arms and took his paw in my hand and to wave as Mister backed the car out onto the street. I couldn’t quite reconcile that he didn’t feel anything. I was not able to imagine what that might be like. I did accept his experience. I believe he was overwhelmed with by feelings turned inwards and back into himself. Mister was convinced that he was malfunctioning and was wretched.

Alone on the front step, but for our dog, I was relieved -grateful- that Mister had a psychologist, help beyond what I could offer. He was looking after himself, getting treatment.

It was a sunny autumn day that glowed golden as he drove away. I estimated I had a couple of precious hours alone before his return. Relieved? More than relieved, I was elated. I put the dog inside, locked the front door, and all but skipped down the street towards the shops. If the Google Map van had been tracking my street that morning, it would have caught me smiling, head up, and walking briskly. But I swear: the sensation I felt was one of skipping. I planned to drop in to see Jenn, the beauty therapist. There was a slight chance that on a Monday morning I could get a treatment without an appointment and have my legs waxed.

I am so ashamed of myself that morning. Mister never came home.
I have learned that depression can be fatal. Before Mister died, I knew this in my head, but then my heart learned it too. I knew of the wonder in Mister’s mind, his intellectual brilliance, but I had not directly experienced the destructive power of a mind gripped by the absence of feeling, covered by the dense cloak of depression. I now know that a condition barely perceivable to an observer can be deadly.

You can recover from depression. With support, treatment and care, it is possible to recover. Without making a choice to change, something might happen, but it will not necessarily happen. Abraham Lincoln said this about depression: “I am now the most miserable man living. If what I feel were equally distributed to the whole human family there would not be one cheerful face on the earth. Whether I shall ever be better I cannot tell. I awfully forebode that I shall not. To remain as I am is impossible. I must die or be better, it appears to me.” Lincoln took responsibility for his choices. Mister took responsibility for his. But the wake of his decision was devastating.
Suicide is preventable, I hear, but since that has not been my experience, I can’t say for sure. Mister died by suicide. Naturally, I’m wary of promises implied by often high profile prevention efforts and campaigns. It seems to me that the burden of prevention is often shouldered by those closest to the one enveloped by depression -be they partner, relative, or friend.

Isolation can be a defining characteristic of the experience of a carer. Take a hint from aircraft safety demonstrations “…In the event of an emergency, if oxygen is required, a mask will appear from above your seat. Pull down on it firmly to activate the flow of oxygen, put it on quickly and tighten the strap. Once you are breathing normally you can help others including children.” I concur, a carer must look after themselves and you need to know what it is that you dealing with. Seek support.

As a resource, apart from Black Dog Institute, the sponsors of the writing competition for which I’m writing this essay, I am bashfully recommending my own blog. It’s a first person account of a determined effort to understand depression, suicide and grief, inasmuch as any of those can be understood. I have posted around 300 entries, with many links to current resources and stories, and only the occasional rant at the world. For the most part you’ll find simple messages, informative and lovingly collated. I want to make available help, rather than impose a particular view. It’s important that help can be reached rather than help riding in for the rescue. I try not to oversimplify the difficult situations we can find ourselves in; nor do I wish to diminish anyone trying to find hope or help. I have tried to create a place for our orphan experiences, the ones that might not be welcome anywhere else. My approach is supportive, saying “you are not alone” (not if you, deep down, don’t want to be). Wonderer’s heart could be a friend in need.

The wise Dr. Suess knows that “…when you’re in a slump you’re not in for much fun, un-slumping yourself is not easily done.” For both carers and those in the grip, the simplest advice is best:
– You are important.
– Your best days are ahead.
– Recovery is possible.

In 2010, The Sydney Morning Herald reported “…less than half the population feeling comfortable around people suffering depression“. That fact can be changed -by reaching out to family, friends and colleagues; and by talking about our experiences.
I, for one, am listening.