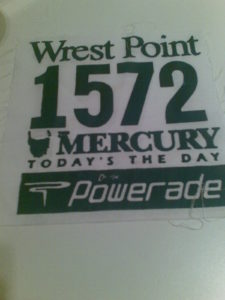 I did the run, finished and crossed the line. The course has a slight downhill gradient for most of the way, fabulous. The feelings that crossed the line with me were extraordinary, I was exultant with achievement and enjoyment, and at the same time depleted by loneliness. The person I wanted to tell was Mottsu, he would hardly have believed I had started running, let alone this achievement. I missed him and his support. I cried, tears didn’t show against the sweat.

I was doing better than surviving, but each mini-triumph made me as sad as I was joyous. Each was a reminder of my changed status.

I recall my friend Hero asking what running meant to me. I had to think, running sort of evolved, almost unintentionally. Running gave me strength, it gave me confidence that could escape should I ever need to. Running helped me to feel physically fabulous, coping and advancing.

Running, or physical exercise in general, is recommend for people with depression or anxiety.

BeyondBlue is one of many sites that report: “Research shows that regular physical activity significantly reduces the risk of people developing depression. People who do not take part in physical activity are more likely to have depressive symptoms compared to people who exercised regularly.”

Running is one way you can look after yourself. Running can lift my mood with surges of feeling able and exceptional. The other welcome side effect is sound sleep.