Finding Dory and a bully (or two)

There is a problem with bullying. The obvious one being the potentially overwhelming affect on the bullied and right now I am referring to the problem of seeing the act of bullying for what it is.

I want to take issue with Finding Dory, the sequel to the Pixar movie Finding Nemo. Finding Dory features two amiable looking sea lions, Fluke and Rudder. The sit on a rock in the ocean. They lazily loll about laughing and snoring. There is a third sea lion, Gerald. He is gifted with a sense of style and wears a little green bucket on his head. His jaunty eccentricity makes him stand out,  his individuality should be endearing but, apparently, is not. He is smaller than the other sea lions, and he giggles without cause. In the movie, this is  sufficient for him to become an object of ridicule – and an unwelcome presence on the sea lion rock.

A scene involving Fluke, Rudder, and Gerald is plays out like this:
Suddenly a skinny sea-lion with a green bucket in his mouth appeared behind them giggling and creeping up the rock.
“Gerald! Get off the rock! Off! Off! Off! Off! Off!” Fluke barked.
“Oy!” yelled Rudder. “Shove off Gerald!”
Rudder and Fluke continued to yell scaring Gerald away.

Their barking has the desired effect and Gerald tumbles off the rock backward, falling into the ocean.

It is supposed to be funny, and as we know a classic defense offered by a bully is that they were joking, they didn’t mean it…

In the movie the bullies are not called out, not by a friendly fish or a good-hearted octopus. That’s such a shame and 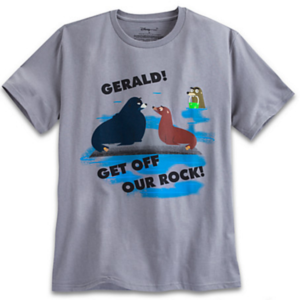 As if it is not enough to side with the bullies and  bullying is also marketed.
I think I am seeing how invisible and insidious bullying is. It’s not recognised and we are given poor role models for how to treat each other.

I can’t see the funny side of scaring Gerald away of him being made so unwelcome. Bullying is not OK. What were Disney Pixar thinking? Not thinking? Big sea lions should not be picking on a little one in a children’s movie. That is not OK. Even if the audience laughs, it’s wrong.Think about it.