Making an ally of the critic

After feeling unfairly criticised I ended up contorted and twisted, wearing my insides as outerwear. Miserable and bruised, I feel all inside and outside and upside down. 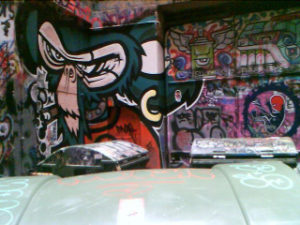 How to make an ally of this criticism, as unwanted and as unpalatable as it is?

Max worked through an exercise to help move from feeling like a disempowered victim of criticism and discover something meaningful in the critics message.

This is my recollection of the work, rather than Max’s original, which I no longer have a record of. It was something like this:

1. Name a situation where you have been criticised and describe it. Role play the critic – move like them and find a hand movement that is central to the criticism
So first up is taking out the content, and finding the central energy what was said to you (or in this instance me). Standing up I try to play my critic accusing someone (me)of sarcasm, without the words, I notice my left hand making quite a direct sharp movement. I repeat the hand movement and study it to discover what it means to me. It is a certain direct movement, angry and pointed.

2. How can you use that energy more in your life?
A big breathand I keep moving my hand around amplifying the movement I’ve dicovered. It becomes apparent that I could be more direct and express my anger/frustration/feelings more authentically. I reflect on how often what I say has a less than authentic veneer of niceness. My good nature is mostly genuine and there are occasions when my message can get moushed up and unclear, perhaps that’s when sarcasm is heard, it must be in me. I could certainly use anger more effectively, and bring it out more directly.

3. Stay in the role of the critic and look at yourself. What is going on, what is the critic seeing as missing in you?
I don’t know what my critic saw as missing in me, but I can see unexpressed anger. Held back or missing is an authentic expression of what I am really experiencing and want to say.

4. How did you already know that – there is no criticism that you get that you haven’t been aware of…
I do feel too eaten up by emotions I struggle to find an outlet for. My dog Shortbread was sick last week after chewing on a dead rat in the garden. When I chew on some allegorical rat I swallow it down. I like to think I have a strong constitution, that I won’t be sick, however I must be a bit poisoned by vermin. I do know that

I see, I start to see something useful…

My thanks to Max and Ellen Schupbach for their work in the world and permission to write about this exercise. I am grateful for what they share as they train leaders, facilitators and me.