In my previous post I wrote about the UK based suicide prevention charity, Campaign Against Living Miserably, CALM. The acronym is not bad but I think the organisation’s name is dismally inappropriate for its worthy goals.

Campaign Against Living Miserably infers that someone living with depression is living miserably, and that may sometimes be true, however miserable is not a word often used to describe the experience of living with depression. Depression is depicted as something darker and more bleak than misery. I don’t know maybe ‘living miserably’ actually understates the unfeeling numbness that often accompanies depression. I don’t like the term or the images it conjures.

Miserable makes me think of a wretched pitiable condition, the word seems heavy with negative judgement. I don’t mean to say that depression is enviable or not in some ways a miserable state, it is just not helpful for someone to be labelled as miserable. It is dis-empowering to be pitied, I much prefer some kind of strength based perspective. I get caught up in the semantics of depression and suicide, and I do because ill thought-out language comes loaded with meaning and connotations that serve to reinforce rather than dispel stigmas. 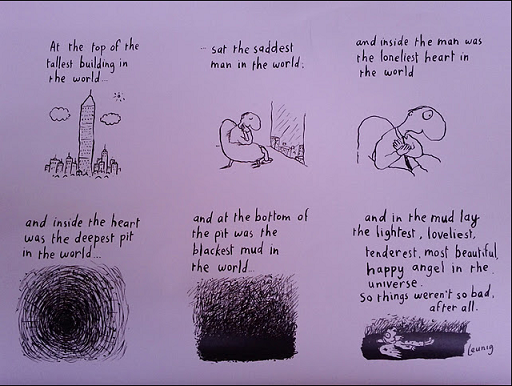 A foundation’s name has a lot of influence on community attitudes, and it’s not possible to convey the nuance of Michael Leunig’s work in a few words. Organisation names that are less judgmental and less negative than Campaign Against Living Miserably are possible:

Woody Guthrie was “…out to sing the songs that make you take pride in yourself and in your work.” Support efforts need to do something similar and not only be against living in a certain way but also be for something – for support, for growth, for living a different way. Rather than struggling against a darkness imagine gently amplifying and nurturing the tiniest, tenderest essential parts that lie quietly at the heart of even our deepest darkest being.