On life myth and dreams continued… 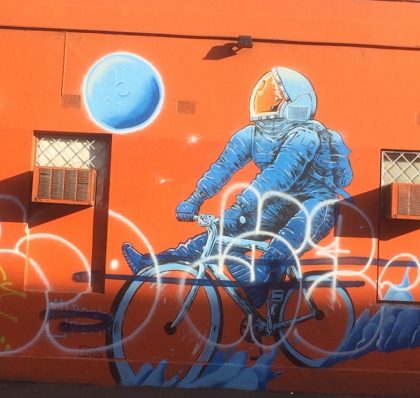 “Our woal life is a idear we dint think of nor we dont know what it is” Riddley Walker said that in the novel by Russell Hoban. It’s one of my most favourite quotes ever. It speaks to my love of myth and dreaming, the wondrous potential of not quite known threads in our lives.

The experience of being pulled in by something unknown or unexpected is something I look forward to. Let me relate one of those times from some years ago when I was on an airplane travelling from Hobart home to Melbourne after completing a work assignment. My few days in Hobart had been busy, as work away from home tended to be. The plane trip offered the first opportunity in days to dip into something related to my Processwork studies. I opened a book that I had stowed, out of public gaze, in the bottom of my briefcase, it wasn’t my usual management text. Joseph Campbell’s Pathways to Bliss: Mythology and Personal Transformation.

I was open to embracing Campbell’s world and as equally prepared to dismiss it. I was wary enough to conceal the cover and title of the non-mainstream text from my fellow passengers. I flicked through the book looking for a passage of sufficient interest to while away the flight time. I was immediately drawn in and read with a dawning appreciation for the psychology of myth and its application in personal transformation.

That was 21 May 2006, flight QF1012 and I was sitting in 4C. The boarding pass has been pressed between the pages of the book, treasured and preserved, endowed with significant memories of the trip that awakened the enthusiasm and passion now being described. Today I gaze at the boarding pass with reverence, still somewhat mystified at what overcame me on that short flight. That can be the power of things not yet understood, and I was grabbed by something.

Myth is a concept that captivates the imagination, it left me yearning to know more. Back in seat 4C, I sat and read and wept with the recognition of something I had struggled with. Every page, stanza and word seemed to validate the part of me that had been dreaming.

I read on, discovering something potent and it instructed me about my path, not with directions but with illumination. I was following ‘something’ and Joseph Campbell knew of this path. He says that we must each find our own path. I had been looking for mine, and feeling overwhelmed by the seeming impossibility of discovering it amid the detritus of my personal life. The idea is to find your own pathway to bliss, according to Campbell. It is a daunting and yet compelling task.
I read that;

“You might ask yourself the question: if I were confronted with a situation of total disaster, if everything I loved and thought I lived for were devastated, what would I live for? If I were to come home and find my family murdered, my house burned up, or my career wiped out by some disaster or another, what would sustain me? We read about these thing every day and we think, well that only happens to other people. But what if it happened to me? What would lead me to know that I could go on living and not just crack up and quit? …Now what do you have in your life that would play this role for you? What is the great thing for which you would sacrifice your life? What makes you do what you do; what is the call of your life to you – do you know it? The old traditions provided this mythic support for people; it held whole cultures and worlds together. Every great civilisation has grown out of a mythic base. In our day, however, there is great confusion. We’re thrown back on ourselves and we have to find that thing which, in truth, works for us as individuals. Now how does one do this?”

Affected by the dreaming potential in these words I was moved to tears. I experienced permission to stand clear of the world and just be. Something welled up, a flood of both loss and promise, and a calm sense of wellbeing ensued with a dawning exhilaration of being and becoming. I had been thrown back on myself and I was discovering support in the world. Everything I had loved and lived for had been devastated in March 2004. Something that happens to someone else happened to me. I had gone on afterwards but blind and dull, stoic rather than inspired. One friend told me that in the same situation she would have run around the street naked wearing only her desperate grief. Such a public display was not quite my style nor perhaps appropriate for the situation. It was more of a resignation that had carried me, a resignation to my lot. Others, looking at my struggle to recover after the devastation, saw an inspirational resilience. It was an observation that was flattering but largely untrue. It was a dull acceptance, rather than resilience, that allowed me to see each next day inevitably dawn, waking, rising and plodding through mechanically. It seemed the only option.

Now, unexpectedly, from seat 4C, another option was unfolding. I was awakening to a quest and something was taking over and pulling me out. Maybe a passenger or two glanced my way observed my tears and felt an unnecessary pity for an imagined grief. These were new tears, however, of wonderment at the potential of the unknown forces at play in the cosmos. Again Campbell articulated it perfectly: “… that awakening of awe, that awakening of zeal, is the beginning, and, curiously enough, that’s what pulls people together…”

Then, curiously, I felt a little inspired to run around the streets naked. Thankfully I was restrained by a seatbelt 30,000 feet above street level. Powerful unknown forces were at play in my mind.
Mythically, flight expresses a break with everyday experience and signifies an associated freedom. My insight this day was an unusual break with everyday experience and occurred while flying, albeit in a plane, above the world. Mircea Eliade says that “flight signifies intelligence, the understanding of secret things and metaphysical truths”. My flight was an everyday one, on board QF1012, and on another level I was awakening to the capacity and potential of myth, and taking a step on the life path I had been always been walking.

Flight. What I didn’t connect to at the time was that my earliest childhood dream centred on flying.

Back then I was returned safely to the ground I stood dry eyed and composed at the baggage carousel, smiling contently to myself, appreciating secret things and starting to wonder about what I should do next.

These days I am also dry eyed and composed, still wondering about what to do next and in the meantime running workshops with my friend Lynn Lobo.

It’s all an idea I didn’t think of…