Paddington and the treatment of young criminal offenders

Paddington Bear’s age is uncertain. His adoptive family, the Browns, did not know how old he was when they found him at Paddington Station. They guessed he was one year old. In line with one human year being two bear years they also decided he would have two birthdays a year. Some time has passed since then and a new movie, Paddington 2, has been released. It documents a bear-hair-raising episode of Paddington’s life. 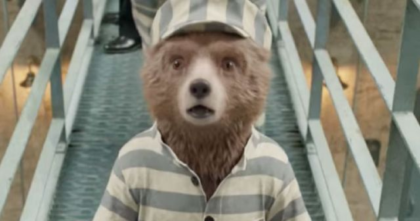 It’s that story which prompted my interest in Paddington’s age. Google couldn’t tell me, Paddington is a timeless and fictional character. Nonetheless, I can determine from his stature that he is a junior bear, he is very much smaller in size than his 100 year old adoptive Aunt Lucy. He does work for payment suggesting he is at least 13, which is the youngest age a child in the UK can work part-time. That must be 13 bear years rather than human years otherwise his adopted siblings, Judy and Johnathon Brown, would be in their twenties. The best I can determine is that he is 13 bear years old, or 6.5 human years. Fair enough. Fair enough that is until Paddington is sentenced to 10 years jail in an adult prison for grand theft. Whether he is really guilty or not is becomes a moot point when he is convicted and incarcerated with hardened criminals.

Why do I care about Paddington’s age? It’s a social justice issue, I care because children should not be placed in adult jails. In the UK , where Paddington resides, the law is that those under 18 who are sentenced to custody are sent to secure centres for young people, not to adult prisons. In Australia, where I live, the same applies you can not be sent to an adult prison under 18 years old. Locally, the issue has been subject to close scrutiny this year, a Royal Commission and Board of Inquiry into the Protection and Detention of Children in the Northern Territory tabled it’s findings in November. The report revealed systemic and shocking failures with devastating impacts on children and young people, recording regular, repeated, and distressing mistreatment.

The real life situation, the one that led to a royal commission, started with a young man who who was assaulted and abused in detention. The problem was found to be more widespread than a single case. Practices, routine until made public, have been condemned, there’s been debate about wrong and right. Laws have changed to provide greater protection to children and young people.

There is something unworldly about Paddington, a childlike naivety that is adorable on him. Put Paddington in any situation and things won’t go as expected. That is unless you’re expecting mayhem. Wherever Paddington goes some sort of calamity is likely to follow. There may be destruction in his wake but no intentional vandalism. He is as surprised as anyone else as the next, but somehow inevitable, catastrophe falls.

Why create a world in children’s a movie that is more cruel than our own? The Paddington movie is fiction, and even so it is a transgression of our norms to depict him an adult jail. It’s lazy by the script writers who believe a happy ending justifies whatever comes before it. This is a story about a talking bear, surely there is room for a lot of plot creativity.

It’s unimaginative of film-makers to allow situations that violate our real world laws and standards in the name of creative tension. Forgivable, and even routine, in movies for adult audiences, but not when playing to audiences of children. The vulnerability and fragility of small children, and little talking bears, needs to be respected and more than that it needs to be protected. Movie plots could be ethical around wrong and right and not transgress (what would be) the real life rights of characters. We need to smarten up.