Waiting for a train

I like to think it takes a bit to spoil a Monday, and sometimes it only takes a billboard. 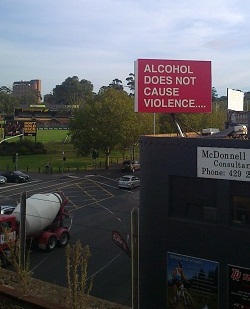 There is a poster visible from the Richmond train station, it turns to reveal one side and then the other. “Alcohol does not cause violence” it broadcasts as it spins. An unequivocal statement I recognise as familiar, being from the “Guns don’t shoot people” genre.

The annoying billboard creates a squall in my head by claiming there is no causal relationship between alcohol and violence. I thought alcohol use was associated with all kinds of violence, but I could have assumed wrongly, or maybe I have listened to too many news story beat ups attributing social problems to alcohol use or perhaps it is convenient to explain away problems by blaming something. I ask my friend Google for clarification and Google provided a review of the scientific literature on the relationship between alcohol and violence.

I know, I know I can’t believe everything I read on the internet – or a billboard for that matter – and this review is well credentialed, coming out of the Presley Center for Crime and Justice Studies, and Department of Sociology, University of California, Riverside, California

The researchers, Robert Nash Parker and Kathleen Auerhahn, conclude that “… consistent finding that we can report from this review of the empirical evidence is that when violent behavior is associated with a substance, that substance is, overwhelmingly, alcohol. Study after study indicates that,even in samples containing relatively high baseline rates of illicit drug use,violent events are overwhelmingly more likely to be associated with the consumption of alcohol than with any other substance” They don’t make a causal link between alcohol and violence, more empirical tests and data are needed. “Much work is yet to be done, but the prospects for greater understanding of how and why alcohol and drugs contribute to violence have never been brighter.” Maybe I should have searched for further other studies but as I am debating with a billboard I have sufficient information to doubt its veracity. 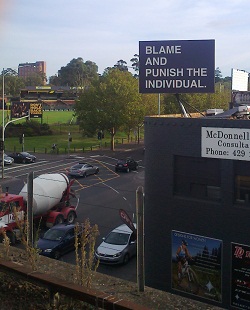 I don’t know enough about the psychodynamics of addiction. I doubt blame and punishment will address the implied problem, and the idea that this be used as an approach bruises my empathetic heart. Back to Google and a search on “blame and punish the individual”. No matches from the Academics at the Presley Center but I am relieved to find local support from others who have posted about being affronted by the same billboard.

As well as collective outrage it has prompted thoughts about collective responsibility around alcohol and violence. I am smiling now…and my train is pulling in.